Get out your paint brushes and colour me excited!

One of my favourite mountain races is only two weeks away, and if you haven't heard about it, then let the rest of this blog be the polyfilla to your knowledge gap.

The race in question is, of course, the Jumbo-Holdsworth Trail Race, formally known as the Holdsworth-Jumbo Trail race for so many years. These days however, you can legitimately call it either of those, as you can actually choose the direction of the circuit you'd prefer to run. Further down I'll go into some detail about what considerations you may want to make before choosing the direction that will suit you, should you want to give the race a go. (Spoiler alert: You should definitely enter!)

This event holds a special place in my heart for a few reasons, but the foremost is because it was the first mountain race I ever competed in. Back in 1997, I was a string bean of a seventeen year old, and I was told about the race by some fellow orienteers who were entering. My reaction of learning about the race and its course was that of complete awe and surprise that people decide to run the damn thing at all, let alone be able to complete it in less than three hours! This reaction is similar to what I experience still when I describe it to most people, particularly if they have walked the circuit before - which is completely understandable when the circuit is traditionally undertaken over at least two days, with DOC estimating at least 12 hours of walking. 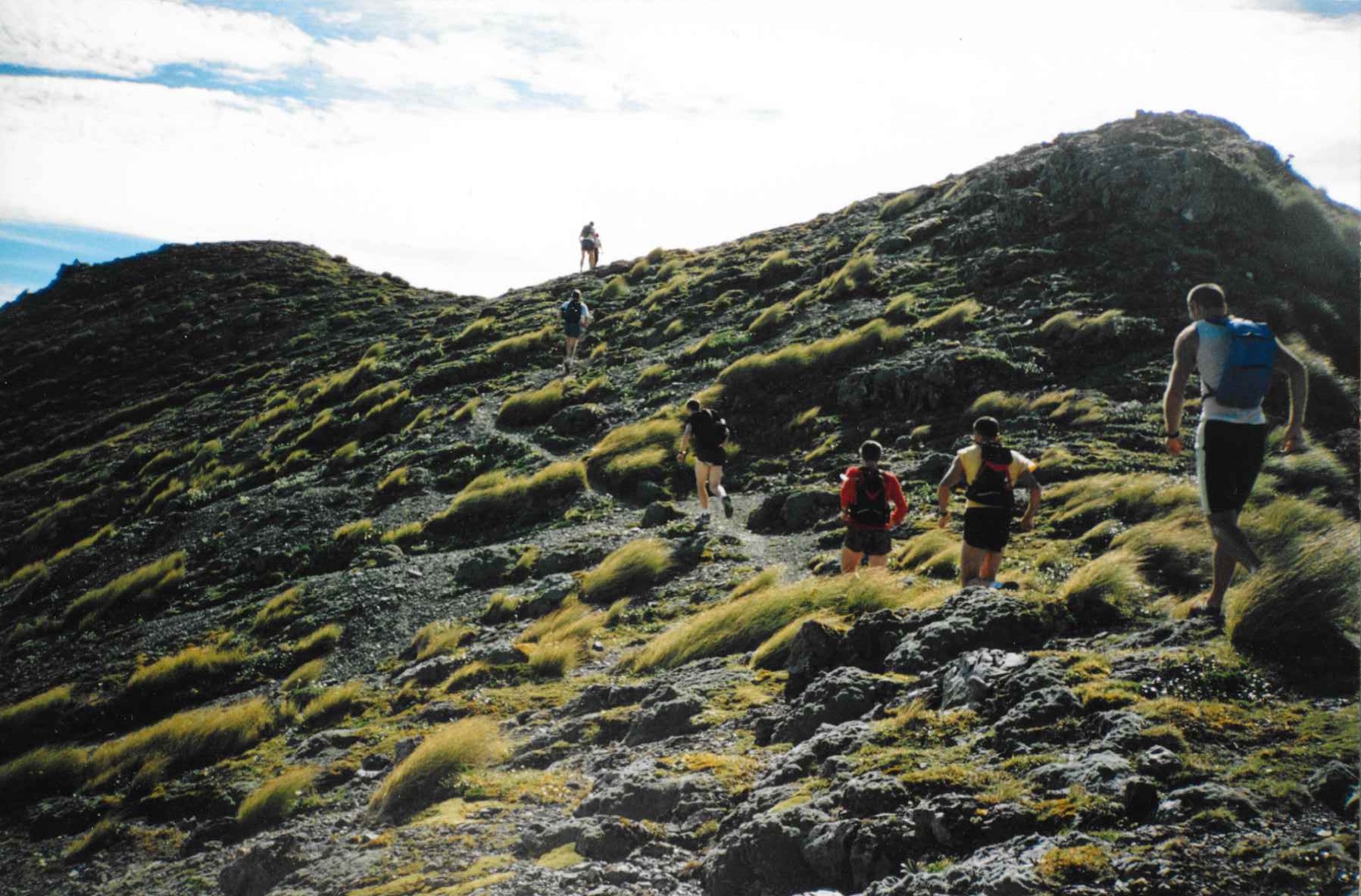 Look at the size of that pack! Running the Holdsworth-Jumbo in 1997 - I'm 4th from right

I think it's this concept of running the seemingly impossible that is at the heart of why people decide to take up mountain running, and it was certainly the driving force that lead me to sign up for that first race - even if it meant having to get a special clearance from the organisers due to the fact I was under eighteen (not sure that's still the case). Since then I've been hooked on the sport, and this race in particular.

Another thing I love about this race is the grassroots vibe of the event. It's competitor numbers sit around 250 or under (including the shorter distance Hooper Loop), and this seems to suit the organisers just fine. It really does feel like they're putting the race on if only to provide a quality, safe and enjoyable event for anyone who wants a challenge. Combine that with the relaxed atmosphere of the DOC Holdsworth campground, where after the race you get to put your feet up in beautiful surroundings while digging into a superb feed put on by volunteers, you cannot help but feel part of something special.

So enough sentiment, if you were to enter this race, and you should, what are you to expect?

Here is the basic info for both directions;

I'm going to describe the course in the counterclockwise, Jumbo first direction, but will add extra notes for those who decide to run the other way.

This course starts off with a very fast 7.5km to Atiwhakatu Hut. This section has only 300m of climb over that period, and the track is about as much of a highway as you can get in the Tararuas. There are some stair climbs in and out of creek valleys, but all creeks and streams are crossed using either small footbridges or more substantial swing bridges.

Clockwise: After the Raingauge descent, your legs are likely quite hammered, but if you have the strength and energy, the run back down the valley can be done very quickly and easily, with only a few minor climbs there to make you feel the extra pinch. Remember, the finish isn't far away!

Once you hit Atiwhakatu Hut, where there will be a marshal and some water and lollies for you, turn left and you're faced with Raingauge Spur track - 732m of climb over 2.2km! This track will start to spread the pack out very quickly, as it's incredibly steep, rocky, rooty and constant. Upon overcoming this brute, you'll reach the treeline and Jumbo Hut, once again greeted by some marshals and water/lollies, should you want those.

Clockwise: Like the uphill direction, this can make a large difference in your time. If you have no fear and a lot of downhill skill, you can get down the Raingauge in very little time. Be prepared to use your hands to grab onto some trees and keep your concentration up - the valley floor gets closer with every step.

Jumbo directly in center, as viewed from Mt Holdsworth Trig. You run along the ridge on the right.

The next 6km takes across the exposed peaks of Jumbo and Holdsworth to Powell Hut. This section starts off climbing up to Jumbo, where some of the track can be a bit narrow and sketchy, but it's all quite harmless - and fun! Once at Jumbo, you turn left and head for Holdsworth along the ridge. This ridge is generally quite wide, and the track is for the most part easy to pick, though some sections tend to let you pick your own path, so keeping a heads up as to the best line is a good idea. Tussock covering the track tends to be a bit of a pain, as will negotiating competitors coming the other direction, but there aren't too many steep climbs along here until just before Holdsworth, it's all quite runnable. Conditions up here could be anything, but if it is clear, make sure to look around you at the view - Wairarapa on the left, and the main range of the Tararuas on the right - quite magnificent.
Once reaching Holdsworth just below the trig, you turn left again and head down the ridge to Powell Hut - and you guessed it, Marshals, lollies and some water.

Clockwise: Climbing up to Holdsworth after the push to Powell can be done quite quickly, and the section to Jumbo is slightly easier than the other direction due to less climb. Otherwise, it's very similar. 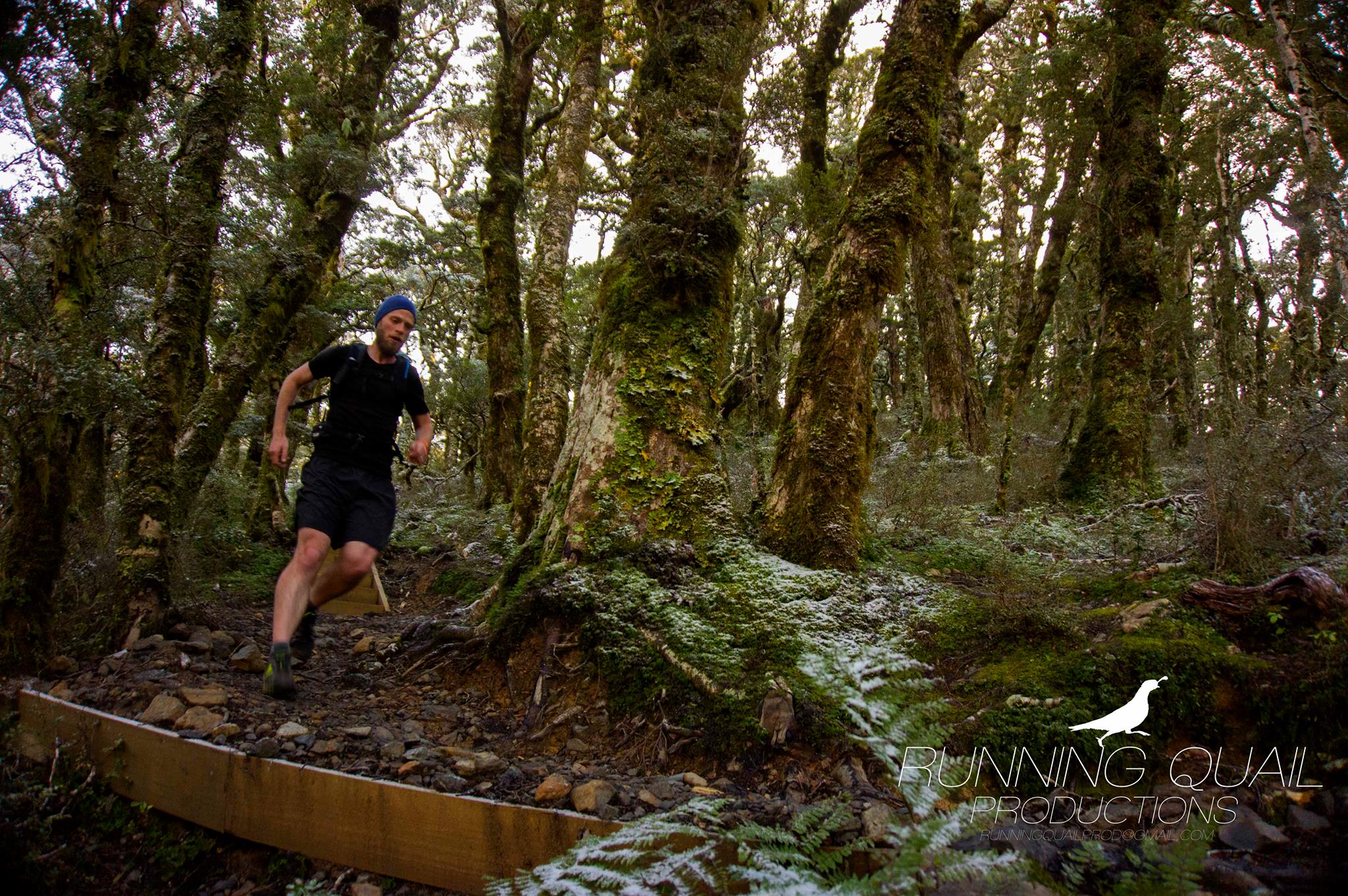 Downhill from Powell really is two distinct sections. First you start heading down the steep ridge for about 1.7kms while you drop 450m. This ridge has some rocky/rooty parts, mixed with some incredibly large, but well built, steps (some with hand rails), as well as some well formed hard packed track as you reach the bottom of the steep section.

Clockwise: If you are quite fit and have good hill running strength, you can run this part. As opposed to running up Raingauge, where you're likely to powerhike/climb a lot of it, the quality of the track and the steps means you can keep your stride up. If you're hoping to make the Sub 1 Hour club to Powell, you'll want to be at Mountain House at around 37 minutes at the latest.

After that you make a small climb up to Pig Flat, run along the boardwalks, and hit the final descent down the Gentle Annie Track.
This track is very well formed and can be run incredibly fast if you have the energy. It's approx 6k from here to the finish, and there is no perceivable uphill, so you have gravity on your side all the way until the last flat push to the finish.

Clockwise: Just like the ascent from Mountain House to Powell, the climb here is very runnable, and you should enjoy the ability to stride out while you can, particularly while you're fresh.

What direction should you run?

Running counterclockwise (Jumbo first) is the more popular direction, this is for two reasons. One being that for the 10 years previous to 2014, it was the only direction to run it. So it's understandable people will continue to run the course they are familiar with. Secondly, it's thought to be 'the faster' course. This is possibly true, but the runners who have both set amazing records, James Coubrough (2:16:08 - counterclockwise) and Carsten Jorgenson (2:20:46 - clockwise) have never run the race in the other direction to compare - and Carstens record was set in atrocious conditions across the tops. The fact is, the majority of trail runners aren't that good at smashing sustained technical downhills, and struggling down Raingauge for 700+ meters is not much fun and will lose you a lot of time, so it's just natural to want to do the course you'll enjoy more.

Personally, coming from an orienteering background, I love technical running - downhills in particular - so I'm a fan of the clockwise, Holdsworth first direction.
I also like to have the chance to get to Powell in sub 1 hour, and join the elite group of people who have done that in the past, and for those reasons I will be running clockwise again this year.

I could go on and on about this race, but I'll leave it at that for now. Good luck with your training and hope to see you on the starting line in two weeks' time!

If you haven't done so yet, you can enter here 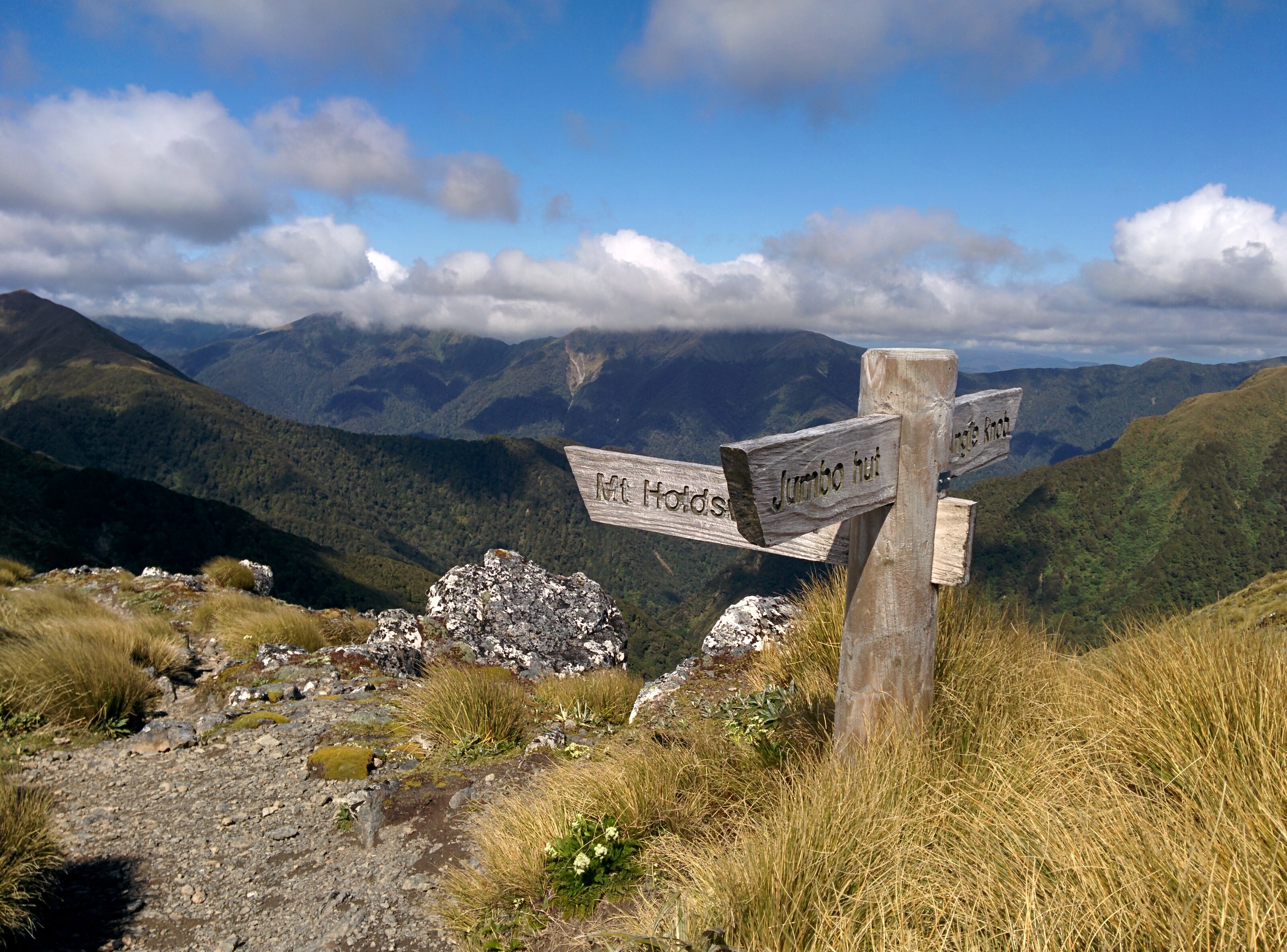 One of those special places to run - Tarawera Ultra Marathon

I love it when a plan comes together! I recall back to the middle of last year, when training…

Rockstar or Athlete? That was the question I was asking myself on the start line of the 2015 edition…